The Happy Cog team could not be more thrilled that our founder, mentor, and good friend, Jeffrey Zeldman, has been selected to be the first inductee into the SXSW Hall of Fame. We thought it might be fun to sit down for a fireside chat, 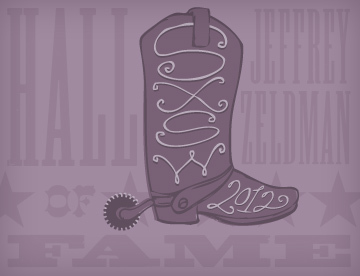 and ask a few questions that he hasn’t answered before in other interviews. Our User Experience Director and karaoke raconteur, Kevin M. Hoffman, spoke with Jeffrey about his long relationship with the SXSW conference, his career inspiration, and a few things you might not know about the man behind Designing With Web Standards, A List Apart, An Event Apart, A Book Apart, and more.

How many times have you attended SXSW?

I’ve attended every year since 2000 — except for March 2004, when I stayed home because my then-wife was pregnant with our daughter, Ava, and I wasn’t comfortable leaving her alone.

By my calculations, then, this will be my eleventh SXSW. (It would have been my twelfth if I had attended in 2004.)

How many times have you spoken?

I’ve spoken on at least one panel every time I’ve attended. It never occurred to me to attend and not speak.

In that time, what are the most notable/interesting/surprising ways in which SXSW has evolved?

Practically every big thing that has happened on the Internet happened at SXSW first. It was at SXSW that I first heard Lawrence Lessig of Creative Commons speak about copyright, first used Twitter, and so on.

It was an honor and a pleasure to perform Lionel Ritchie’s “Hello” with you at SXSW 2010. Tell me about your musical background, and how your relationship with music influences other aspects of your life.

My mom was a Juilliard-trained pianist. My dad is an engineer, but he also paints and played trumpet when he was a young man. My brother Pete is a brilliant polyrhythmic drummer. I grew up in a house filled with music and I grew up at the same time as rock and roll. As soon as I could afford a $30 cheap-ass air-pump one octave “organ” from Kmart, I was in my first rock band. I studied music at Indiana University and played during college and afterwards. In DC, I got into composition and production, eventually opening a small studio. I worked with Robert Goldstein of the Urban Verbs on musical scores for PBS documentaries and created music for a dance company called Upright Vertebrates and a feminist documentary by Maggie Hadleigh-West. It was electronic instrumental experimental stuff, mostly.

My main axe in the studio, besides a DOS computer running Personal Composer software (an early MIDI sequencing and synth programming platform) was an Akai 12-track recorder/mixer. The Akai had great sound and amazing features, but it ran on a proprietary 12-track tape format. When the model was discontinued and my record head broke, I couldn’t get it repaired, which means I lost access to all my original 12-track masters. This made me appreciate the value of technological standards.

You’ve made a few amazing, but not surprising, career transitions: from traditional advertising to interactive strategy; from web producer to writer and industry speaker. One could generalize, from doer to thinker. What drives you to explore new territory?

A lot of people think I’ve moved from doer to thinker, but it’s not true. Doing is thinking.

I’ve always taught. From the moment I began to create and design web content, I was also teaching others how to do what I did — initially via “Ask Dr. Web,” a large, unwieldy tutorial that was one of the first things I published on my personal site. The Web Standards Project was evangelizing in thinking rooted in doing — no one who wasn’t an active web designer-developer could have analyzed the problem posed by lack of standards and proposed a solution based on W3C and ECMA recommendations. I do less hand-work today. That’s the nature of a design career: unless you are Milton Glaser, God bless him, you eventually hand off a lot of the hands-on design work to younger, hungrier, less experienced designers, and drift upward into strategy. But I don’t sit in meetings all day. (No offense, I know how much value you get out of meetings, Kevin; you’ve made me a meetings believer!) My hands are always moving, I’m always stirring and tasting. To stop doing that would be to stop living.

Given your front row seat to myriad ways in which human interactions with the web have evolved over nearly two decades, what are some of the warning signs that an industry is going to undergo significant change?

I wouldn’t call them warning signs so much as tremendous creative and business opportunities. iPhone, Android, and iPad: mobile and responsive are changing everything. You’ve got HTML5 and CSS3 and webkit browsers that understand those technologies in people’s hands. Even if your customer is stuck using an outdated browser and operating system in the office, she lives on the smartphone, and that’s where the technology and the new opportunities are. Rethinking how we do content for a distributed, mobile-focused world. Rethinking what “page” means or if there’s even such a thing. Rethinking practically every sacred cow of web design while never, for even a moment, losing sight of the person who actually has to use your site or application. The challenges and opportunities are amazing right now. I’m proud of what Happy Cog is doing in this area and of how we’ve played our small part in leading the charge in some of these areas.

What is the funniest story that you’ve ever heard at SXSW?

Jim Coudal of Coudal Partners was complaining that nobody recognizes him when he is with Jason Fried of 37signals; they’re all fans of Jason’s.

So one day Coudal and I are in the hall at SXSW when this absolutely gorgeous woman comes up to Jim Coudal.

“Excuse me,” she says to Coudal, “but aren’t you friends with Jason Fried?”

Coudal stands up a little straighter and says, “Why, yes. Yes, I am.”

Woman says, “My brother LOVES him!”