Designers are From Mars Prior to my days at Happy Cog, I worked on a team tasked with creating an online promotion for our client’s new high-end candy. The candy was delicious, but each small box sold for approximately $4, so conveying its quality was important. 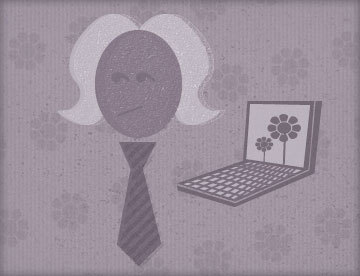 The product’s target market was women in their 20’s and 30’s, so my team decided to take the high-maintenance diva approach to the design. When all was said and done, we launched a microsite full of glamour and glitz, sparkles, stilettos, and lipstick tips. Users could take a quiz to determine just how “fabulous” they were. At the time, I was in my twenties, and I’ve always liked candy, so I considered myself a member of the target audience. But there was a problem: I couldn’t relate to this content at all. I liked to be girly from time to time, but sparkles and stilettos were not my thing and they never will be. I also couldn’t see any of my female friends connecting with this. To be fair, the tone of the site was tongue-in-cheek and it wasn’t taking itself too seriously, but I just didn’t feel right about it. It didn’t feel right to reduce our target audience to stereotypes. Had I known then what I know now, I probably would have spoken up and advocated for a better understanding of our audience. Were these women really into makeup and expensive clothes and nights out in Manhattan? Or were we completely off the mark?

Since those days, I’ve read quite a bit about gender and design. I’ve learned that, as designers, most of us are clueless about gender. When we do take gender into account, we resort to simplistic design thinking and assumptions. But more importantly, we overlook gender when it is most critical. What if I were to tell you that 80% of all consumer purchases are made or influenced by women? And what if I were to tell you that women in American culture are the primary decision makers, influencing not only the products we buy, but the products we use? Our customers’ perceptions, desires, and needs often vary based upon their gender. This has been established through research [PDF], and yet we rarely factor gender into our designs. When we do factor gender into our designs, we rely on assumptions about what men and women want, and that leads us down the path of clichés. When designing for women in particular, we often resort to the Shrink It and Pink It reflex, adopting pastel and feminine aesthetics, dumbing things down, and developing stereotypical content such as parenting, fashion, and gossip.

The Shrink It and Pink It reflex is nothing new. During the prosperous post World War II era, traditional one-car households were becoming two-car households. Auto manufacturers caught on to this quickly, focusing their efforts on women. In 1955, Dodge introduced the La Femme, a pink car that was sold with a matching purse, umbrella, and makeup case. The car was discontinued after two years because it didn’t sell as well as its more practical counterparts. Like men, women seemed to want quality, reliability, and comfort, not frills and pastels.

Fast forward to the digital age, and we still find ourselves making the same mistakes. Remember the search engine Altavista? In 2000, the folks behind Altavista launched Ladyvista, “the official search engine for ladies.” Ladyvista was essentially Altavista with a feminine front end (a pink background and floral embellishments). Not surprisingly, the site didn’t last long and was taken down in 2001. Very recently, reports of a new phone for women appeared on several tech news sites. One source revealed plans for the HTC Bliss, an Android smartphone equipped with calorie counting and shopping apps. Both its seafoam green exterior and wallpaper were described as “calming.” The product won’t hit the market until the end of this year and the information about it is from an unnamed source, yet I can’t help but wonder if these are examples of what women really want or need. Do they need a search engine with frills, or do they need a search engine that just works? Also, can we assume that all women want to count calories and shop on their phones?

So the question becomes, how does gender factor into our design decisions? The answer begins with understanding your audience. As an experience designer, I know firsthand that it is nearly impossible to design an effective experience for users without knowledge of their needs, motivations, and desires. But do needs, motivations, and desires vary by gender? It depends upon various factors, including the product itself, who’s buying it, and who’s using it.

Sometimes gender makes little or no difference. Consider the washing machine concept by Minsung Bae. It’s a waterless system that hangs in the closet and cleans your shirts, requiring little to no effort. The concept could appeal to anyone who does laundry, but oddly, it is intended for men. Why wouldn’t women want to use this? Most people, regardless of their gender, would want to save time and effort when it comes to doing laundry (or at least I would hope so). Unless the product is designed specifically for male clothing, I have to wonder why it wouldn’t appeal to women as well.

Conversely, sometimes gender does matter. When airbags were first included in automobiles in the 1980’s and 1990’s, they proved dangerous to women and children, causing injury and even death. Early testing for airbags was woefully inadequate; federal requirements were minimal and stipulated testing with 5’9” dummies. Most women are shorter than 5’9”, and children are of course much smaller than adults. This is a sobering and powerful reminder that sometimes gender is critical to our design considerations.

Once you’ve concluded that gender is a consideration, be sure to avoid stereotypes and assumptions. People respond to authentic connections. Cliches don’t resonate with customers, and they certainly don’t distinguish your design from your competitors’. No matter who your customers are, they are multidimensional people who don’t want to be stereotyped. Holly Buchanan, who blogs about marketing to women, says “You make an emotional connection with a woman when you show you respect her, understand her, and value all of her contributions and roles in society.” Undoubtedly the same goes for men.

Don’t Think Pink, a book about marketing to women, notes that most men and women make decisions differently. This applies to decisions about purchases and product adoption. Generally, men are more interested in features and specs. They want to know the latest technology or capabilities of the product, focusing on its face value. They tend to make decisions for themselves, and less often for those around them. Women, on the other hand, tend to view things holistically. They care less about what’s under the hood and more about how a product or experience will make their lives easier. They also tend to make decisions on behalf of others or influence the decisions made by others. This includes not only their children, but their spouses, partners, extended family, friends, and co-workers. So when evaluating a product, she thinks “How will my spouse or partner use this? Can my kids use it? What about my friends when they come over? I should also tell my co-worker about this, since she’d really like it.” When targeting female customers, tell the story about how your product or experience will help them and help others around them. For instance, not only will your killer app let her manage her own busy schedule, but it’ll also manage schedules for her spouse and kids, and maybe even integrate with the schedules of her friends and co-workers.

It’s important to note that sometimes feminine design does work. Some women may want a pastel laptop or a pink car, but that doesn’t mean that all women want products like that. It’s also good to remember that what people say is very different from what they actually do. So just because a woman says she likes the idea of a pink laptop, it doesn’t mean she’d actually buy it or use it.

Femme Den, a group of industrial designers in New York, specialize in designing products for women. Their products are widely used and well-designed, ranging from digital camcorders to hospital scrubs and cookware. Femme Den makes a great point by stating that women don’t need to feel feminine when engaging with every single product. Mobile phones, laptops, tools, cars, and appliances are products that women use, but they don’t necessarily want to feel feminine (or masculine) while using them. Consider the Apple MacBook. A MacBook’s gender-neutral design can appeal to both men and women.

Femme Den’s tagline is “We save good women from bad design.” Going forward, I encourage you to think outside the box when it comes to gender, just as you’d think outside the box for any other design problem. Also, looking back, can you recall a time when gender factored into your design? Do you have any funny or compelling anecdotes about gender and design?