For the first time in 120 years, a design patent is being argued in front of the U.S. Supreme Court. 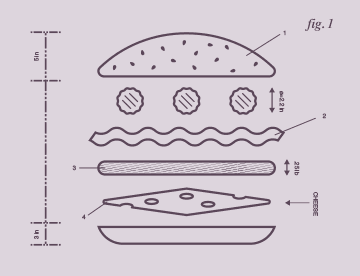 It’s the usual suspects. Samsung has appealed a lower court’s ruling that several models of its smartphones violated an Apple design patent. While the outcome of the Court’s decision may very well affect interface design at large, longtime issues with the patent system remain unchallenged.

Patent law hasn’t gone before the Court since the Patent Act of 1887 was pushed through to protect two companies whose carpet designs were being filched and sold by a small rival. Ruling that an object’s appeal is inextricable from its design, lawmakers concluded that copycats should fork over all profits from their forgeries to the patent holder. In Samsung’s case, those profits exceed $500 million for what frighteningly amounts to little more than infringement on look and feel: rounded corners and a display of gridded icons, two protected features included in the patents filed for the original iPhone. Central to the ruling is whether those formal parts, not its functional ones, can stand for a more complicated whole, and thus the entire profit on that phone.

Though the dollar figure is extraordinary, it’s not any less absurd than what’s been wrought on the web by patent holders already. In a 2006 opinion, Justice Kennedy wrote, “An industry has developed in which firms use patents not as a basis for producing and selling goods, but, instead, primarily for obtaining licensing fees.” He was referring to MercExchange’s $30 million win in its infringement case against eBay for unauthorized usage of the “Buy It Now” button, part of a burgeoning litigious tech culture which has availed itself of a patent office unprepared.

Many web designers had their first run-in with patent law earlier this year when a brief wave of panic (and smug elation) swept over Twitter as news broke of a lawsuit alleging the Apple website infringed on a 2014 patent awarded for the web carousel. A former software engineer named Samuel Lit filed the patent in 2007, several years after the carousel had come into common use, and similar to MercExchange’s case against eBay Lit had been active but unsuccessful in licensing his invention. But however unlikely, a gavel in Lit’s favor could change the complexion of the web overnight, as organizations wrestle with what other section of the homepage to fight over. (I kid. Sorta.)

Excessive penalties may deter organized design pirates from filching your interface whole cloth, but it extends a bridge to a new breed of patent trolls who can make a cottage industry of registering every permutation of CSS under the sun. It’s exactly the little things which hang in the balance. In support of the original total-profit penalty leveraged against Samsung, a joint statement from Tiffany and Adidas says, “Although the copied design constitutes only a portion of the complete design, it is often the case that the copied portion of the design (i.e., the hardware on the handbag or the sole of the shoe) resonates with consumers and drives demand for the overall article of manufacture.” If the Court rules particular parts can act as a sort of metonymic short-hand for the full appearance and profit of an item or service, if a clasp can represent a whole handbag, then it’s worth considering what component parts of a website or product make it distinct from another.

It’s plausible, certainly for the fashion industry, that what tickles somebody’s money bone is a minor detail that accounts for only a fraction of the total design but is otherwise brand significant. What’s fundamentally being argued for here is identity protection. The brand is the interface, the interface the brand. “Only a McDonald’s cheeseburger looks like a McDonald’s cheeseburger,” wrote Oliver Reichenstein in the excellent “The Interface of a Cheeseburger,” “I unwrap it and look at the bread and the meat and the ketchup mustard color pattern: McDonald’s cheeseburger it is.” Reichenstein’s point has as much to do with brand standards as working within a typology: every order of design, even the cheeseburger, has a narrow acceptable range of deviation from the norm, and designers have to meet the public somewhere along that continuum.

That incrementalism doesn’t preclude innovation, though how influence and inspiration can be interpreted by a court is worrying. Just how different is different enough? Famed designer Raymond Loewy called this the MAYA principle — Most Advanced Yet Acceptable. The rule was at work in the failure of Apple’s own Newton, a category-coining gambit whose ambitions outpaced technological reality. Palm cashed in Apple’s chips four years later.

Thing is, everybody wants to be Apple. Doubling down on this lawsuit reveals an Apple that assumes it will always be ahead of the curve, always the benefactor. In some ways it’s a bold internal directive to keep things that way. If it has a tincture of hubris, the Tiffany and Adidas brief makes the point: “designers invest enormous amounts of capital, time, and sweat equity in creating innovative designs that capture consumers’ attention and drive consumption.” They go on to say, “Design pirates capitalize on the huge investments made by fashion designers by copying only popular and successful designs.” It’s a fair point, and as a designer one I’m sensitive to; anyone who’s been the victim of a blatant copycat knows how little legal recourse there is to set things straight. But that, as SCOTUS has already noted, is an issue for Congress to take up.

We won’t know the lasting effects of the Supreme Court ruling for years, and regardless of which way the wind blows it won’t address the core problem: a broken patent system that gives protections to concepts too broad and too obvious to merit single ownership. Though overhauling the patent system has been bruited about on the web since Amazon began defending, lucratively, its 1-click order patent, patent law is unlikely to get the serious attention it deserves by a Congress that has demonstrated, time and again, a sharply offensive ignorance — if not outright hostility — toward design and technology.