What I Learned from Happy Trees When I watch someone else work, I see all the clever and messy little ways they get from one place to another. Observing others approach their work has given me useful instruction and new techniques—both technical and soft skills—that I can take into my own work later.

I’ve been watching a great deal of Beauty is Everywhere recently. And besides thinking “How could I forget this amazing show existed?” I’ve also been asking myself, “How can I learn from Bob Ross as a designer?”

In each episode, Bob doles out invaluable life lessons disguised as painting techniques.

“Look around. Look at what we have. Beauty is everywhere—you only have to look to see it. ”

While watching Bob paint a landscape, I often find myself very pleased with how his sky is taking form—and then he makes a mark that feels wrong. It’s not a decision I would have naturally made, and I’m not sure where he’s going. In my head, I shout, “No! Don’t put anything in front of that little tree—it’s perfect!” He had just messed the whole thing up. I get a little nervous for him too, because he can’t erase that shape in a single take on a TV show.

But then I listen to his smooth, soothing voice, and I remind myself that he’s going to work it all out and I’m probably going to learn to see something differently in the process. Sure enough, the new part of the painting adds unexpected dimension and I’ve learned how I could replicate it. From here, I learned watching someone else make observations and “mistakes” can strengthen my own way of seeing.

“They say everything looks better with odd numbers of things. But sometimes I put even numbers—just to upset the critics.”

It’s important to upset my inner critic now and then. Making up rules (even unconsciously) before having a chance to begin can be far too limiting and keep me from making some of my best work. When I have a clear picture of how something is going to look in my head before I get to work, I’ve found it can become quite sticky. However, on the show, Bob will always follow a whim or an impulse and see where it takes the painting. He’s not afraid to play.

When I watched Bob create a seascape, it was clear that taking risks can pay off. Sometimes he’d start with something that looks miscalculated, like a weird yellow lump in the middle of the ocean, and it turned out to be the best part of the painting—a transparent glowing wave that helped orient the light source.

“If I paint something, I don’t want to have to explain what it is.”

Finding a balance explaining design is tough because someone is either drawn to it or they aren’t. Reasoning might not make any difference. But when something does need explanation: a process, strategy, or technique—it’s important to be able to establish trust.

Bob does a great job enabling his audience to trust themselves. He encourages improvisation and risk-taking. But, by staying confident and relaxed—even when he takes an odd turn—you trust him.

But how can a designer become more trustworthy with clients?

When I anticipate a client’s sense of urgency but remain calm, we don’t put up our defenses unnecessarily. When I’m confident in what I’m saying, it helps encourage them. In time, there is less over-explaining. There is comfort that comes along with that kind of honesty.

Explain to Teach, Not to Impress

“Trees cover up a multitude of sins.”

Although Bob probably has more painting experience than the majority of his audience, that’s never how he speaks to them. He’s in it to show them a few “neat little tricks” and give them confidence to bring their own work to life. He doesn’t hesitate to point out when he makes a mistake. To be an effective teacher, it’s important to take away the fear that comes along with working outside one’s comfort zone.

“Even if you’ve never painted before, this one you can do.”

Bob foresees his audience’s potential frustrations. He artfully calms them in advance by reaffirming the flexibility of the medium. His overall demeanor is a constant reminder of his helpful intent:

“That’s nice. Just keep practicing and it gets easy. It’s all practice.”

“Every day is a good day when you paint.”

It makes you want to start painting, doesn’t it?

Give yourself a chance. Trust yourself, stay relaxed, and people will trust you right back. 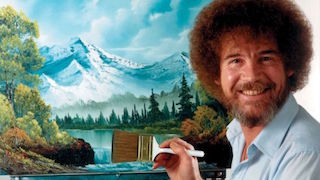 Previous The Truth About Facts
Next C-H-E-E-R-S!