An Open Letter from Cog’aoke Headquarters Oh, hello. I didn’t see you there.

My name is Keyboard Man. For the past two years, I’ve been honored and delighted to host Happy Cog’s Cog’aoke Karaoke Competition at the SXSW Interactive conference. 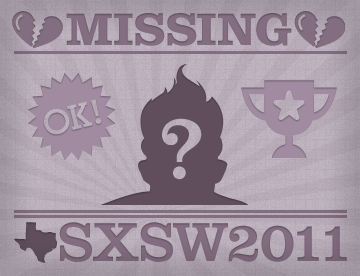 Maybe you’ve attended Cog’aoke. Maybe you’ve even performed. If you’re on either of those lists, you have my eternal gratitude and sincere admiration. You are also probably the object of more than a few secret crushes of these people.

Cog’aoke is a force of nature. Happy Cog and its supporters have come together with a singular vision: to create the ultimate SXSW event. It’s more than just a party and more than just a competition: it’s a partition. No, that’s not right. It’s an experience. One that is planned many months in advance, requiring the coordination of a group of amazingly talented people in Philadelphia, San Francisco, New York, and Austin. And it requires more than a few pesos to organize. We take blowing your mind very seriously.

It is therefore with a heavy heart, a teary eye, and lingering muscle soreness that I say this:

Happy Cog will not be holding the Cog’aoke competition at SXSW Interactive in 2011.

The reality of the situation is that Happy Cog is trying some new “things.” We started planning and building these things in early 2010 and the effort continues into 2011. You’re starting to hear about some of them, and others you’ll hear about soon. And they have required a lot of focus. Additionally, our clients have continued to grow in size and quantity, as have their expectations of us. We will never let them down. We’ve also booked appearances throughout 2011 at several industry conferences, including our own An Event Apart, and at least six Best Buy grand opening ribbon cutting ceremonies. Hefting those giant scissors ain’t easy.

But we aren’t hanging up the microphones and 1980’s references for long. Look for the magic to continue in the years ahead, which will make our previous events look tame and predictable by comparison. With the extra lead time our 2011 hiatus gives us, we’ll be exploring the best options in web-based karaoke competitor voting software, controversial twitter API integration, tongue-in-cheek editorial tone, and web superstar judges. Speaking of HTML5, I, for one, think that a certain Mr. Jobs is not out of the question as a judge. Not Steve Jobs, probably, but some guy named Jobs, certainly. We could probably use Google to find a dude named Jobs pretty easily, right? Or we could just ask someone to dress up like a Panda.

With that my friends, I leave you with this advice: live to party and party to live. Which begs the question: what will you be doing in Austin this year instead of going to Cog’aoke?