Can an algorithm do your job?

This is a question that’s been on my mind since stories about the Associated Press’s robo-journalists started making the rounds again. For those who don’t know, the AP uses an algorithm that translates data into corporate earnings reports, three-hundred word stories or so. They’re composed of short declarative sentences written convincingly enough to appear human-generated. 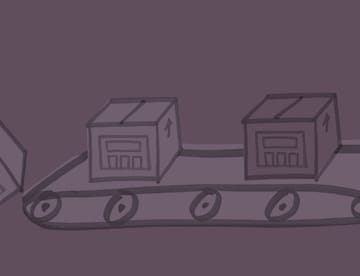 Other news orgs have their own algorithms. The LA Times has a quakebot, the New York Times automates some wedding announcements. In all three examples we’re effectively looking at madlibs—sentence templates interpolated with data points. But it begs the question: if a simple artificial intelligence can intrude on one creative field, why not another?

Now if you use Twitter there’s a good chance you’ve seen ads for The Grid, which claims it can build you a custom website from the content out, not the template in, using just an algorithm. It’s an attractive idea, the organic-ness of it.

For years, programmers and developers have been trying to model this behavior—what we might call artificial emergence, the idea that without an author an ecosystem can self-organize and sustain itself. Think of a coral reef or an ant colony. It’s a wonderful theory—a great metaphor for urban design—but what we make is inherently limited by our own imaginations and biases and values. A program still bears its author’s fingerprint.

In fairness to their team I hope The Grid succeeds. What the service offers is not a threat to me or my job and it’s not supposed to be (the site suggests designers “should focus on perfecting their master vision” and let the algorithm handle the dirty details). Really, the examples do a convincing impression of a professional website. This says more about the state of design on the web than it is evidence of emergence: that the contemporary website has become so homogenized it can be (in theory) replicated by an algorithm is alarming.

Of course, neither the AP’s robo-journalists nor The Grid are thinking machines, nor in any way in possession of some level of understanding. To my knowledge no such machine exists.

To help explain, here’s a thought experiment from John Searle. It’s called the Chinese Room. 1) A computer receives a question written in Chinese from a native speaker, then 2) based on a complex algorithm, the computer responds in intelligible-enough Chinese that the questioner is convinced the answer actually comes from a human being. 3) Searle replaces the computer with a human being who does not speak Chinese and repeats the experiment. 4) Instead of a computer program, the human subject follows a manual for constructing an answer. The result will be the same.

He concluded that in neither case does the responding program (computer or person) have any comprehension of the conversation. The so-called intelligence is just a manual in the lap of a person inside a box—or data points in a sentence—or boxes on a grid.

A few weeks ago our founder, Jeffrey, asked Twitter if the ubiquitousness of Squarespace’s advertising was a sign that web design had been commoditized. I didn’t see it this way. I see it in the spirit of design accessibility, in the larger sense of the word: handsome, inexpensive, approachable. It’s like IKEA or Target. And if encouraging people to make things and share their stories and plant their flags, if this has been a hallmark of this profession since its humble beginnings, then far be it from me to find fault in Squarespace or The Grid or whomever else comes along with their mass-produced translation machines. Any criticism of them is a criticism leveled at our entire industry.

Returning to the AP example for a moment, they’ve reassured the public and their staff writers that no human jobs were lost to a robot journalist. Their robo-colleague actually freed up their staff to spend more time on critical issues (a benefit echoed by the folks behind The Grid). It also showed just how easily a computer can get along mimicking the commonplace.

So when I look at Squarespace and The Grid I don’t necessarily see a threat, I see a mirror. They’re throwing back in our faces all the clichés and paradigms we can’t break away from and turning them out on an assembly line, robot after robot.

And really, they’re doing us a favor: they’re reminding us to think.

Previous The Intro Tech Call
Next Back to the Basics: Experiment and Get Real Weird