One Hand Washes the Other I once believed that great design was created inside of a secret creativity chamber. Armed with a knapsack full of snacks, 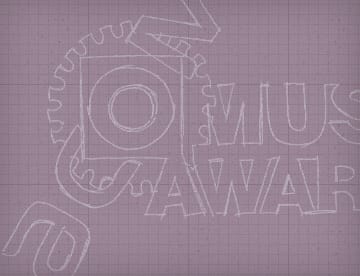 I’d lock myself inside, and work long, hard, tedious hours until I emerged with a “masterpiece.”

I don’t need to tell you how wrong I was. Most of the time in my work, collaboration was a given, though my partners were often limited to members of my internal team. This changed with my last project. This year’s O Music Awards were a 24-hour awards show and Guinness World Record breaking Flaming Lips Concert. The timeline was my most aggressive ever. A strong partnership with MTV’s internal design team was crucial to the project’s success.

Get on the Same Page…Quickly

The need to form a solid relationship with the MTV design team was born out of necessity. While we at Happy Cog worked on the website, the MTV design team worked on show production. The site, motion graphics, signs, even the tour bus needed to be cohesive, even though the site was being created in Philadelphia, and the show was being developed in New York. For this project, MTV’s Senior Designer, Sean Gresens, and I functioned as a mini design team. As a member of the MTV team, Sean knew more about the show and his company than I did. He was a more valuable resource on the project than the many, many grunge brushes I used to distress every graphic.

Early on, we had a conversation about how we wanted to work together and developed a plan. Instead of waiting until my official design milestones to share work, I kept him in the loop during my design process. In turn, he offerred feedback and kept me informed about any conversations about the show that might have influenced my work.

If this plan worked, the show and site would have a unified art direction, and we’d save time by not having to redo work that was off target.

Get Over the Fear of Feedback

Because of the aggressive timeline, I couldn’t spend gratuitous amounts of time refining directions that could lead me to dead ends. When working on the first phase of the OMA home page, I spent two hours fussing with the background color of the hero area. The more time I spent contemplating the virtues of chartreuse, the farther I veered off track and neglected bigger problems.

Whenever I felt myself stalling, I sent a screenshot over to Sean via IM to get a gut check. By the time I sent work over to the Viacom team for approval, many of my decisions had already been vetted. This meant approvals came quicker, and I didn’t have to spend time redoing work that completely missed the mark.

The biggest hurdle of working this way was getting over my fear of sharing incomplete work. Hiding behind a barrier of “polished” work is pretty cozy. I always imagined that the secret creativity chamber had a mighty vault door that would protect me from hurtful comments, or you know, useful feedback. Eventually, I got over this. After all, my goal was to contribute to a successful project, not protect my ego.

Simply put, our collaboration made our work better. A few hours before the blog design needed final approval, my graphics were nearly complete. They blended iconic imagery from the show’s deep south setting with analog music illustrations, all collaged together to evoke a hand-done style. I created a map line depicting the show’s route, which ran up and down the page. The vibe and colors felt right, but the graphics lacked any indication that this was a digital show. I had no idea how to introduce technology into the graphics without it seeming overdone.

Talking through the blog design with Sean, he told me his team had an idea: turn the map line into an ear bud cord. It was a subtle touch, but that was all the design needed. After a few rapid iterations with Sean over IM, we found a solution that worked, and the design was off for approval with 10 minutes to spare. I would’ve spent hours photoshopping laptops and iPhones onto the graphics if we hadn’t collaborated.

At the end of the day, I’m satisfied with my ability to distress graphics, proud that I met all my (crazy) deadlines, and ecstatic that the work we created was born out of a great partnership between Happy Cog and Viacom. If you’re keeping your work guarded or working from a secret lair, now is the time to stop!