Stepping Out of Line

Years ago, I was presenting comps on a scheduled call to a key stakeholder of my then-agency’s flagship account. It was my first call with him in months. He was unfortunately on vacation and without his laptop. That should have been 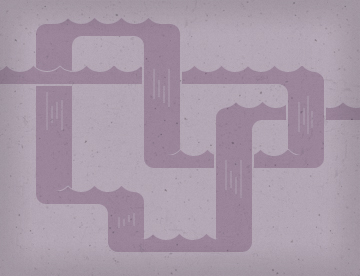 the end of it.

Instead, he asked me to paint him a picture.

Now, I like to believe there’s always some perfect combination of words you can jam together whose collective prose makes it possible to talk your way out of (or into) anything—like some kind of Word Voltron—but I was a blank.

My colleague in the room was giggling. I stared at the Polycom, hoping for rescue, waiting for our account manager to step in and politely (but firmly) suggest moving the call to a time when it might be possible to actually hold a productive review. Help never came. And so I described, in detail, from top to bottom, every pixel.

And our client gave actual feedback on an imagined website.

I think I blacked out. I came to 15 minutes later, jolted by the realization that I’d lost. Graphic design was surrendered. The latest edition of Choose Your Own Photoshop Adventure was written and I was on the wrong side of the hypertext.

Do you: A. Blame Others? or B. Learn Your Lesson?

Truth is, I surrendered before I ever launched Photoshop.

I probably don’t have to tell you about the waterfall model, a relic from which many practitioners still suffer and one the Web outgrew when the dot-com gold rush ran dry. (You could argue it was never right for web design at all.) Phases with a distinct beginning and end are easy to scope, easy to resource, easy to sell (in theory). And so we wait and watch for the artifacts to plunge our way over the falls—developers for designs, designers for wireframes, etc. If something is amiss, it’s the fault of whoever came before. The waterfall method avails complacency and I was complicit in my client’s client-from-hell moment. He treated graphic design as decoration and rightfully so because I colored wireframes. I put gloss on buttons. I was stylist, not strategist.

I had stood by and waited to be called.

Designing a site without some prescription for interaction and content is, at best, reckless—what are we, savages?—and the waterfall method assumes phases are fulfilled before moving on, satisfying an immutable law of experience design: form follows function. But Sullivan’s credo never called for a divide. Rather, the process should mimic nature, to be organic; it posits an object’s form naturally evolves out of resolving its purpose, the way bees instinctively build a beautiful and efficient, geometric honeycomb. Nature has no “visual design” phase. Why do we?

Process, however, is not the real problem. Iterative methods more closely honor “form follows function” and their adoption is a certainty as “mobile web” becomes “the web” and organizations—both clients and vendors—admit waterfall’s failings. But waterfall isn’t going to give up easily, and I’m not advocating we all swear allegiance to our new Scrum overlords just yet. (Responsive web design may very well be their harbinger—look busy!) Because, dear designer, if you’re not collaborating with your IA and content counterparts, you’re done for.

Collaboration may not come easy, but we are on the brink of convergence and there’s no room for aestheticians. We’re taught to go it alone and re-emerge days later with something brilliant and clever (and finished) because we are judged on individual contributions. Design is ugly in the middle. Collaboration means feeling exposed and vulnerable. Collaboration requires faith.

I didn’t learn this lesson on my own. (I blamed the account manager.) In my story, I bemoan the waterfall process, but in fairness I made little effort to seek out collaboration and I paid the price. Without the small and agile team we had, launching Club Nintendo in the compressed timeframe afforded might have been impossible. We sketched together. We brainstormed. We debated. We exposed issues and course-corrected quickly. We shared accountability and the product is better for it. A seat at the table is a privilege, not a right; you earn it through commitment to user experience—from discovery to deployment—and through persistence.

How will you avoid going over the falls?